Soul Wars: Wrath of the Everchosen 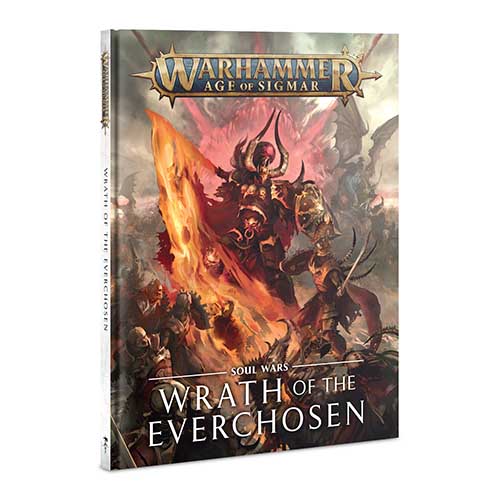 - Region of War: the Eightpoints – Recreate the bizarre and chaotic environment of the Eightpoints, including Realmscape Magic, Realm Commands and Realmscape Features.- Roaming Monsters – Savage beasts abound in the Eightpoints, and the din of marching armies and battle attracts them like moths to a flame. A canny general can make use of them… The larger your army, the more of these creatures can be added to the game, with their own special rules for movement and engaging both armies!- Wandering Endless Spells – Raw magic and eldritch energies suffuse the landscape around the Varanspire, and endless spells can become rogue entities in their own right. Just as with the monsters, they have unique rules to control their behaviour during the game.- Siege Warfare – Newly updated siege rules provide guidance on setting up Strongholds, the Siege phase (including a new Siege Focus to represent pre-battle preparations), and Siege Effects. You'll also find six Siege Command abilities, three for Defenders and three for Attackers. These rules include new Siege Warfare allegiance abilities for every Grand Alliance and faction:Chaos: Beasts of Chaos, Blades of Khorne, Disciples of Tzeentch, Hedonites of Slaanesh, Maggotkin of Nurgle, Skaventide, Slaves to DarknessDeath: Flesh-eater Courts, Legions of Nagash, Nighthaunt, Ossiarch BonereapersDestruction: Gloomspite Gitz, Ogor Mawtribes, Orruk WarclansOrder: Cities of Sigmar, Daughters of Khaine, Fyreslayers, Idoneth Deepkin, Kharadron Overlords, Seraphon, Stormcast Eternals, Sylvaneth- Battleplans – eight narrative battleplans let you fight through Death’s invasion of the Eightpoints- Allegiance Abilities for the Hosts of Chaos - including the Legion of Chaos Ascendent, the Knights of the Empty Throne, the Legion of the First Prince, and 11 others that focus of specific aspects of Chaos